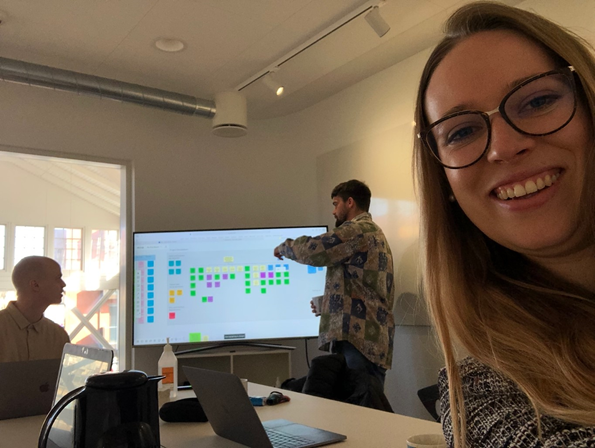 At United Wind Force, they are experts in interpreting oil analysis reports from wind turbines, which is an essential part of their operations. But these oil reports contain a large amount of data and interpretations require a substantial amount of time, making it difficult to scale up the operations. In an effort to allow for upscaling of operations and increasing the customer base, a team of talents from LEAD THE TALENT was assembled with the main objective of developing a digital tool. A digital tool that would be able to automate the collection of data from oil reports and concretize the knowledge of United Wind Force and apply said knowledge to interpretations of oil reports.

To get off to a good start the team had some help from Lasse from “Plan A Projects”, teaching them Agile Project Management, which allowed them to successfully align expectations with United Wind Force and create a realistic project breakdown. The project breakdown helped create a clear overview of the workload in the following months and how the different tasks could be divided between the talents to suit the different competencies among the talents.

The creation of a prototype to automate the interpretation process

Creating a complete tool to automate the interpretation process is a tall task considering the team only has 12 weeks and very different competencies. The plan was therefore to create a fairly simple prototype, while documenting the potential and limitations for further development of the tool, that can be used if United Wind Force wishes to have a more complex tool developed by third party developers. The documentation thereof was supplied in multiple report covering what the basic tool should be able to do as well as future suggestions that could elevate the use of the tool and increase the efficiency.

The properies of the prototype

A digital prototype was developed in Microsoft Excel using Visual Basic for Applications (VBA), which for most team members was a completely new programming language, but allowed them to acquire new skills in the process. The prototype gives United Wind Force the possibility to collect data much faster than usual as the tool implements a PDF scanner for the oil reports, while also storing the data in a structure that hopefully in the future will allow for running advanced statistical analytics of the wind turbine industry. As a second feature the prototype also supply United Wind Force with a way to produce immediate interpretations of oil reports and present them in an “almost ready to send” user report, which in terms of design resembles their website adding alignment across platforms.

Scenarios that could improve brand recognition

Because team members have many different competencies that applies to much more than developing a digital tool, the team has also helped United Wind Force to construct scenarios for marketing campaigns that could improve brand recognition as well as formulating strategies for communication with customers that could strengthen customer relations and hopefully generate new leads. In a way all team members have been able to use their specific competencies and add important value to the project.

“The LTT project have contributed to moving our company towards a digital transformation that is crucial for being a part of the industry. The talents have been working dedicated and openminded for new work process and ideas. The overall gains from this project have been positive and we will strongly consider hosting a new LTT project in the future.” Kristian Vissing, United Wind Force,